Cave diving pioneer Sheck Exley published in 1979 his book “ A Blueprint for Survival “ where he investigated and analyzed the cave fatalities occurred to this point and identified three leading factors that have contributed to the accident. With his study Sheck Exley founded the basis for training of cave divers and future training included the prevention of these three factors. In later years Wes Skiles continued the investigation of accidents occurred to this point and identified two more leading factors that contribute to accidents in the underwater cave environment.

Divers trained for open water diving, even divers with a lot of experience in the openwater that enter the overhead environment are not prepared, let alone trained for the specific risk of cavern or cave diving. It is the lack of knowledge about the understanding and basis of accident analysis cavern and cave training that puts the openwater diver at risk.

2. Failure to maintain a continuous guideline to the open water.

The failure to maintain a single continuos guideline from ones location in the cave back to open water is the single most direct reason for cave diving fatalities. Open water divers don’t process the knowledge of the importance of a contiguous guide line to the surface. When these divers enter the overhead environment the visibility in most cases is very good but that may change during penetration when not using proper trim and propulsion techniques.

When turning around these divers may face a zero visibility situation where it is impossible to see and find the way to the exit. During the training to become cavern or cave diver, divers learn and practice often how to correctly lay a guideline during penetration and practice then the procedure on how to follow a guideline in complete darkness and zero visibility situations.

3. Failure to reserve at least two thirds of the beginning breathing gas supply for the exit

Divers must make sure that one third of the gas supply is used for the penetration of the cave, one third for the exit and one third for emergencies. The failure to reserve two thirds of the breathing gas supply for the exit is the second direct reason for cave fatalities and its violation creates a serious safety issue not only for the diver who violates the rule of thirds but for the entire team as well who may depend on that breathing gas for a safe exit in case of emergency.

Deep diving creates a variety of potential problems and is the third direct reason for cave fatalities. As a diver ventures deeper into the water column a variety of additional problems arise and have to be addressed. While diving deeper we use more breathing gas as in shallower water, hence giving ourselves less time to penetrate under the rule of thirds and more important, less time to solve problems that may occur such as delayed exits or entanglement.

Other factors such as nitrogen narcosis, oxygen toxicity and deep water black out are factors in deep air diving practices and should not be exercised. Decompression stress is another factor in deep diving and special precaution has to be taken to accommodate for decompression procedures. With the availability of training and equipment for nitrox, accelerated decompression and trimix some of the above mentioned factors can be addressed.

Most agencies limit cavern divers to 100 feet / 30 meters and cave diving activities to 130 feet / 40 meters. Special training, caution and breathing media should be used at a deeper depth.

5. Failure to use at least three lights

Cave divers must carry three lights each in order to enter the cave environment. Cavern divers use the sun light near the entrance as their primary light source and need to carry only two mechanical light while the sun light is used as the third light source. While the loss of a light source may cause the diver to delay his exit it should not contribute to a fatality since exiting the cave with a backup light or with no light using the continuos guide line to the surface are important exercises practiced during the cavern or cave diver training program.

In cave diving as in open water diving the buddy team procedure and concept should be exercised and failing to do so could potentially lead to situations where a solo diver perishes in a cave while a team mate could have helped out with entanglement, gas sharing or navigational errors. Failing to dive with a team mate can be a contributing factor in a cave diving fatality. There are special circumstances however where solo diving may be warranted but these solo diving techniques include special training, procedures and equipment.

1. The number one reason for trained cave divers to perish in caves is exceeding depth limits of training or experience. While cave diving is a potential hazardous activity so is deep diving. Combine these two activities and a potential dangerous animal is bred. Around 80 % of all cave diving fatalities occur below 150 feet / 46 Meter and may be contributed to nitrogen narcosis, gas volume requirements, breathing gases used or gas changed conducted at the wrong depth with exceeding Po2’s of 1.4 ata or END’s deeper then 130 feet / 40 meters. Today’s cave diver has a variety of proper training and breathing gases available and can stay within the parameters of established safe diving procedures and practice.

2. The number two reason for trained cave divers to perish is the failure to run a continuous guideline to the surface, visually jump line or incorrectly mark jumps or permanent intersections. If divers penetrate a cave or cavern without a guide line or swim from one guide line to another without laying and installing a jump line they voluntary put their lives at risk due a potential silt out that may occur behind them due to their own swim techniques or another dive team that may enter behind them and reduces visibility to zero. To find the other line or the exit might prove to air and time consuming in order to safely exit the overhead environment.

3. The number three reason for trained cave divers to perish is the failure to reserve two thirds of the starting breathing gas supply. The violation of securing one third of the gas supply for a team mate in need is putting not only the diver itself at risk but the whole team. Once the diver has used the air it can not be reproduced, it can not be used for emergencies.

While these rules and contributing factors are very well established other factors such as diving solo in caves, complex navigation, diving in large groups, photo or viedography, diving with an incompetent dive partner, diving beyond ones limit and experience, diving in a new cave or environment, diving with new equipment, using improper or insufficient equipment, diving through restrictions or diving beyond one’s comfort zone may contribute to cave accidents. 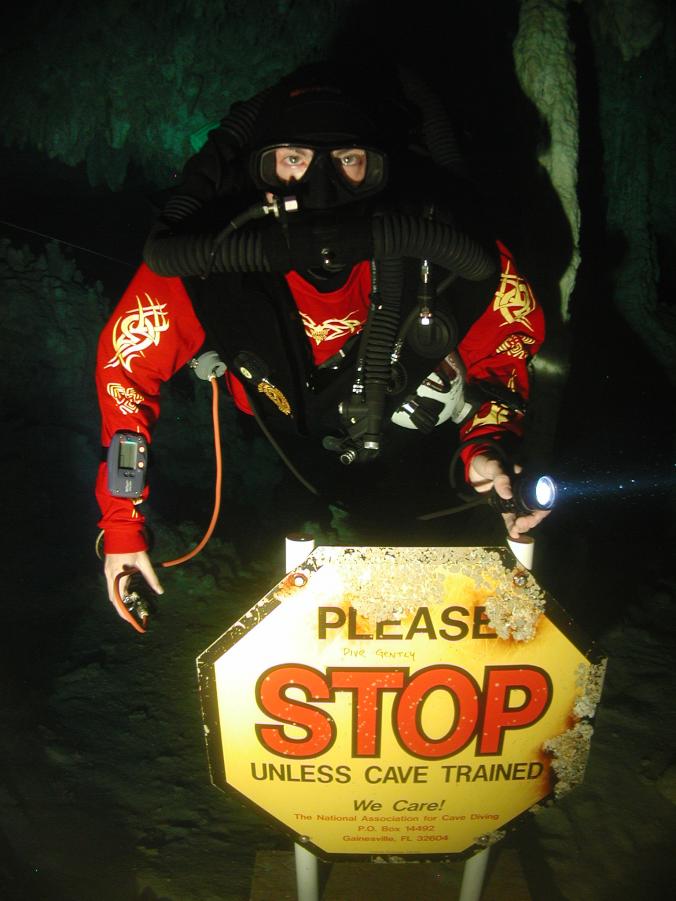